This is a hard blog post to write - not that the subject matter is difficult! My issue is where to start. I guess there's no other way to say this - I've made an entire language for Breakaway. Yes, complete with grammar, sentence structure and number system. It's called Trade for now until I can think of a more suitable name. (For added silliness, it's pronounced trah-deh if we're using its alphabet.) Trade is a spoken language, sign language and written language.

In Breakaway, almost everyone would have difficulty conversing verbally. Some people don't even have mouths! I ensured every character has appendages with digits that can be used for communicating with those outside of their culture or subculture. (What a weird paragraph to write.) 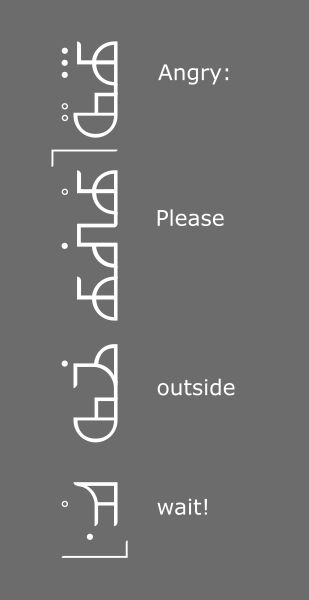 Trade's structure is Emotive: Subject-Verb-Object-Tense-Oblique. (This looks like: Sadness: He see truth now. Or: I am sad that he finally sees the truth.) It might be easier to break everything else down in a list:

Most of Trade's consonants sit squarely in the Alveolar, with several spread between Fricatives and Stops. Its vowels are all either in the front of the mouth or the back of the mouth, there aren't any central vowel sounds.

While five vowel sounds seems quite short, it's handy for my purposes. I wanted to create a language that is simple and direct. For people who have several different ways to communicate, finding the right words can be difficult. Trade should alleviate that. 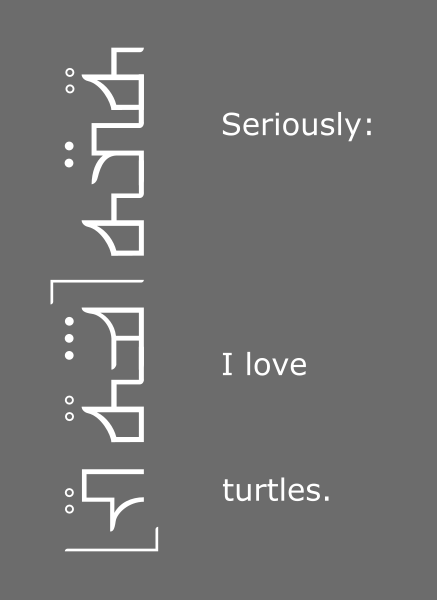 Trade is written top to bottom, right to left. Vowel sounds are not written in sequence, and instead float to the left or right of the consonant depending on if a vowel leads the syllable. Each vowel and consonant sound has a corresponding symbol, with vowel sounds represented with simple dots or circles.

Sentences or paragraphs are preceded by an emotion so that the intention of the sentence or paragraph cannot be mistaken. This makes Trade even more efficient, especially for people in Breakaway who cannot rely on body language or facial expressions to convey nuanced meaning.

Each sentence is capped with half-brackets that show when a full thought is finished. The half-brackets are combined when another sentence follows - but only if it is covered by the same emotion stated with the original sentence. Otherwise, a new emotion must be stated, and the brackets will be opened again.

Trade currently does not have punctuation outside of sentence caps. I am looking into potential punctuation to note time (past, present, future) and questions. Placing an emotion before a sentence removes the need for some punctuation, but not all.
It's important to note Trade is not a language easily used quickly. If your house is on fire, you're not going to take the time to say, "Urgently: get out of the house!" Trade is specifically for use where careful wording and clear language is required - not when you're in danger.

This is the nerdiest thing I've ever written, and I make tabletop games and video games as a side hobby.
Share
4