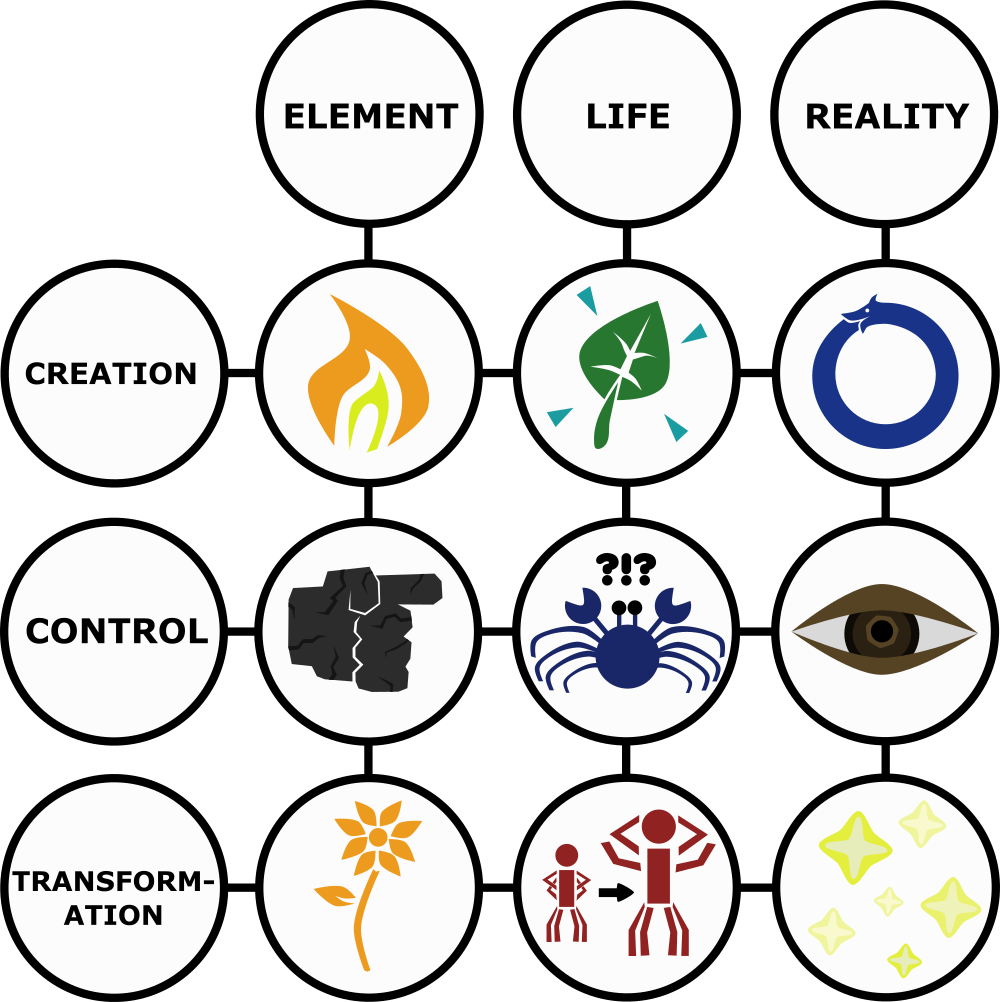 Breakaway features a flexible system of spell creation that allows casters to make whatever spells they require – within certain aspects. I’ll write about Horizon’s lore in another post, but this short post will discuss its mechanics. Horizon is the resource of magic – or temporal disturbances that break through space and time, depending on who you ask. In order to create your own spells, you follow the School + Form + Aspect formula. You cannot have more than one of each, unless your Background states otherwise.

There are both in-world lore reasons and practical reasons that someone may or may not use certain types of languages, not to mention legislation created around its usage. (For example, manipulating or dominating another person’s mind or body is outright illegal.)

Keep in mind that the following are not concrete versions, as the game is still in Alpha. I expect to add more Aspects later, specifically of the Summoning variety, and tweak them to better serve players’ needs or wants. Also, the art to the left is a placeholder, until the lovely Joshua Wright can work his magic!

Creation: Make something from nothing, but also destroy when combined with the right form.
Control: Exerts your will over a target, also makes people see or experience things not necessarily real.
Transformation: Changes the properties of a target, but also makes properties perceivable or hidden.

Form: What the Spell Affects

Element: Includes fire, earth and water, but also covers electricity, fog, ice, heat, and so on.
Life: This form affects all living beings, organic or artificial, as well as the deceased.
Reality: Includes the physical and its properties – like gravity – but also dreams, sounds and thoughts.

Aspects: What the Spell Achieves

Where Are My Keys
Transformation + Element + Target
An arrow forms in front of you, pointing toward the place you last set your keys. No matter where you go, the arrow points toward your keys for five seconds. This arrow is only seen by you and will disappear at the end of the spell.

Skeleton Flashmob
Control + Life + Target
Two sets of remains get up and dance for 5 seconds. This spell has only one recorded use in Sharyshan history.

Falling Anvil
Creation + Element + Range
You form a small anvil made from stone within 60 feet, in the air, and in your line of sight. The anvil falls immediately on top of whatever is below it, doing 1 damage.

Life Juice
Control + Life + Power
You can take the life from a piece of fresh fruit and give it to yourself or another person. You can drain a fruit all at once, healing 2 Wounds. Fruit must at least be the size of an apple to be drainable and cannot be more than 5 days old. After draining, the fruit appears rotten and inedible.

Understand
Transformation + Reality + Duration
For the next 5 minutes, you can speak fluently in a target’s language as if it were your own. The target must be within 30 feet of you and within your line of sight.
Share
4