Mismatched roads run through the city - some are cement, some are tiled, some are brick, some are cobblestone. Odd animals swim the waterways between islands, where not one building matches the style of another. The continent of Sharysh looms to the west, its new border town of Curiosity just beyond the boundary wall. To the east is Tetra Sovereign, where small, round metal buildings have risen out of the ground in strange patterns.

A tangle of tunnels run beneath the port city. Their stonework is not uniform, and neither is their layout. Some lead to dead ends, others provide access to other islands, and yet others are completely submerged or collapsed. Attempts are underway to clear and map the tunnels. The provided map is by Maddy Wentwart, a self-professed cartographer. Even though cartography was considered a dead profession by most for nearly a millennia, Maddy insisted on joining the ambassador's team to meet with the Tetrans. As a result, our map is factually incorrect but still the most widely used throughout the port city. 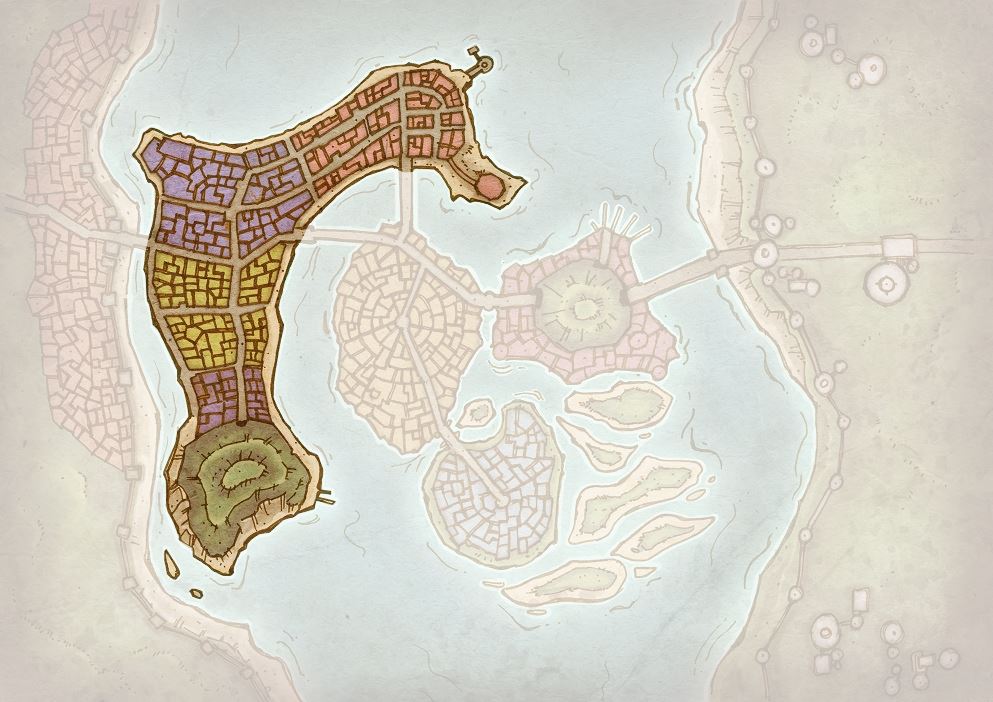 So named for its size, this island seems to be filled with odd office buildings, stately capitol buildings, several parks, and at least 5 large statues of strange creatures scattered throughout the island.

A giant lighthouse sits on its northeast shore, but a normal light, lense, or any other standard lighthouse apparatus doesn’t adorn its top. The living marble head of a one-eyed creature sits at the top. Its features are strange, and expression indescribable. If a ship nears the port city, its single eye lights up and guides the ship into port. It cannot - or perhaps does not want to - speak.

A stepped mountain sits on its southern shore, with several caverns inside. Each cavern has been meticulously shaped into a building with several rooms inside each. The caverns themselves are lit by a blue moss that covers ceilings and walls. The moss moves between bright and dim on a 6-house schedule. 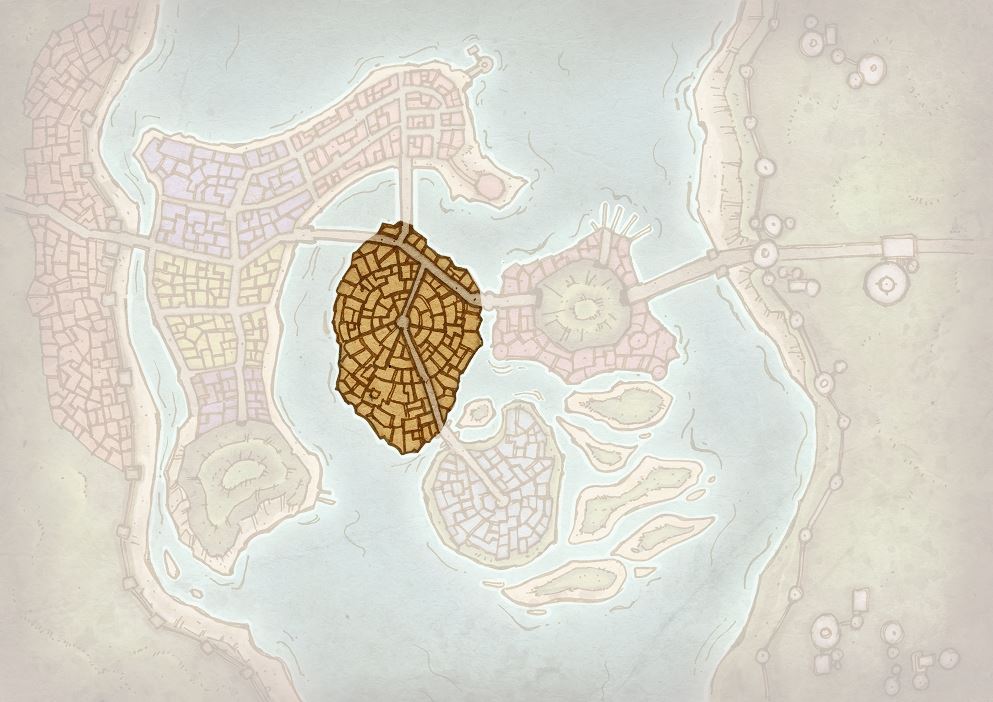 This island contains several large, artistic buildings and a multitude of restaurants and small shops. Many windows are made from stained glass or mirrors.

An amphitheater sits along its northern shore, with several sets of carved benches made from an unidentifiable bone. The stage is flanked by wooden carvings of odd plants and animals, each depicting an event - a fight, a discovery, a death, and so on. A Sharyshan acting troupe holds community theater every week, where all are encouraged to participate.

A 3-story building takes up a single block by itself. It is a restaurant called 3 Square, with each floor themed after a certain meal of the day. Originally full of offices, it has been renovated to have over a hundred private rooms, each set like a different family’s dining table. The bottom floor sells dinner, the middle floor sells lunch, and the top floor sells breakfast. 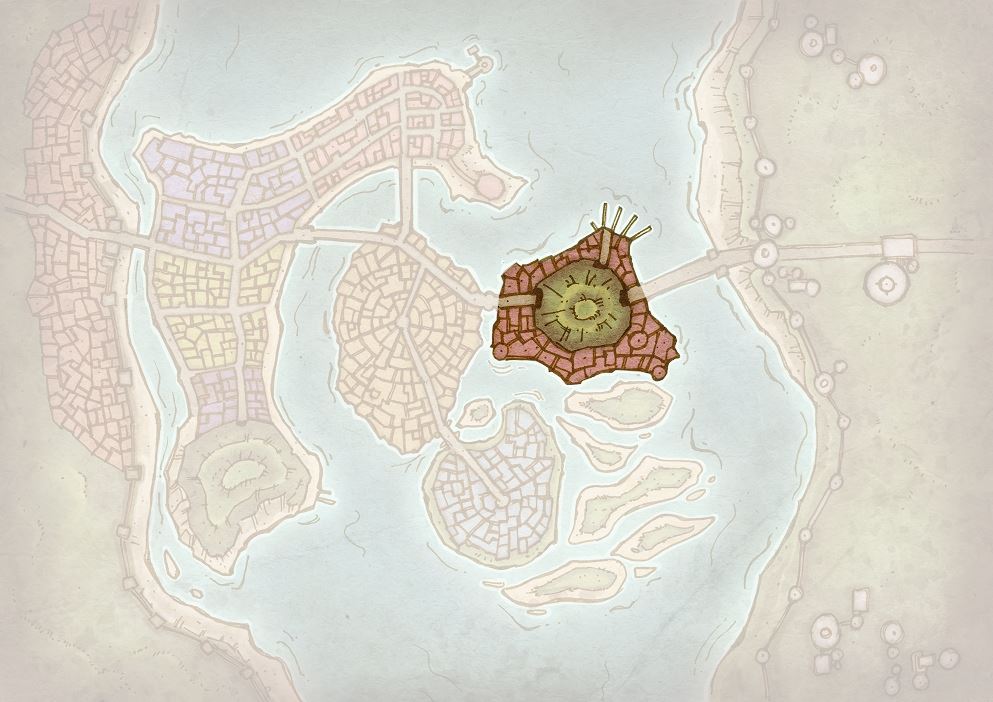 This is the most decorated island in town. Several pubs and hotels dot these streets, and is where the phrase "Five Points gets you five punch-drunk!" was born. (The phrase does not make sense but was very loudly shouted by a particularly belligerent sailor for four hours in the early hours of the morning, and has since been taken up as a local motto.) Five roads run together to a point in front of the docks, giving the island its name. The docks are concrete piers are arranged in exact angles - these have been measured and confirmed to be incredibly precise. In the center of the island is a hollow mountain filled with enormous bays where cargo is stored.

The island’s largest pub is called The Clever Hook. Its entrance is a simple, unassuming door in an alleyway with a single bouncer waiting outside. If you descend the stairs, you would enter a massive underground cellar filled with tables, a wrap-around bar, and a large stage. The bar has a beauty pageant theme that is taken very seriously by its regulars. Once a month, formal pageantry takes place. Winners from each month compete in a yearly brawl to determine the most poised contestant.

Snakeshead bridge spans the waterway between the Middle Island and Five Points. It is a covered bridge made of green stonework and translucent shingle roofing that darkens in the sunlight. Both entrances of the bridge resemble a large snake’s head, mouth open. It is popular for people in love to visit the bridge and toss paper notes of hope into the water. 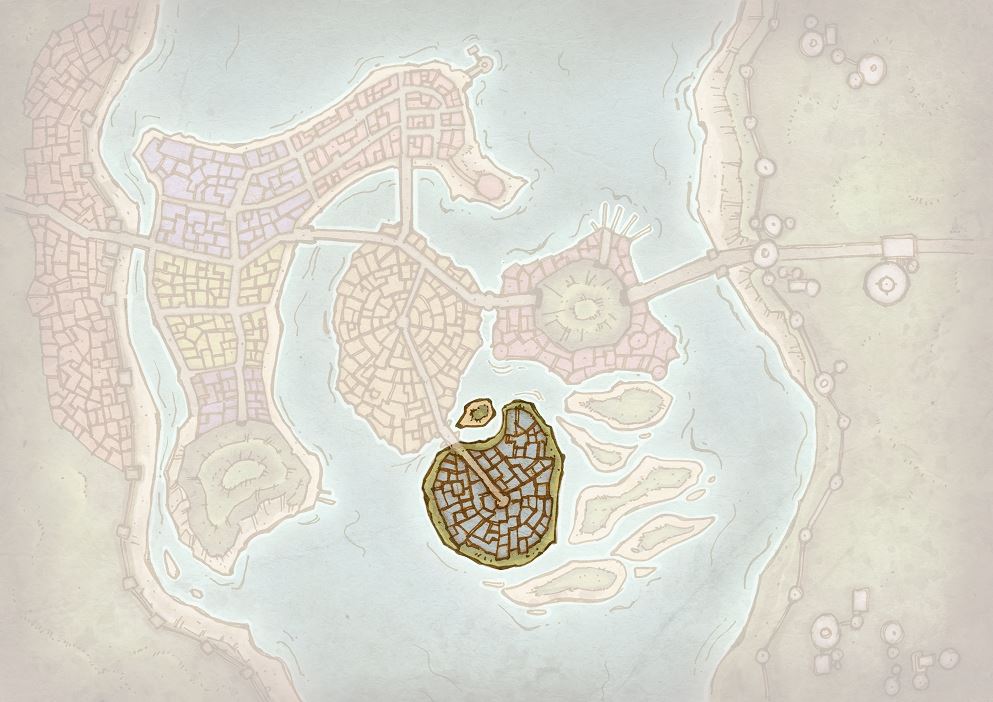 This is the largest of the southern islands. The Small Islands sit below it, but the South Island is the southernmost island with structures. This part of the port city has a large, open markets area with stalls built directly into the ground. A small island, called South Eye, sits directly above the South Island. It is covered in strange statues and a single tower made from black, polished stone. It has no known resident and no way to get inside, but a single window in the top of the tower is lit every night with a green light.

A set of pristine buildings sit behind metal fences with odd locking mechanisms. On studying and determining how to use the locks, several scientists from both Sharysh and Tetra Sovereign moved into the buildings to study the port city.

A large, stately building with pillars sits near the center of the island, with three long staircases of 1,000 steps each leading to its massive front doors. The Charter Authority has set up inside, and has created a complicate pulley system for exhausted travelings trying to traverse the steps. 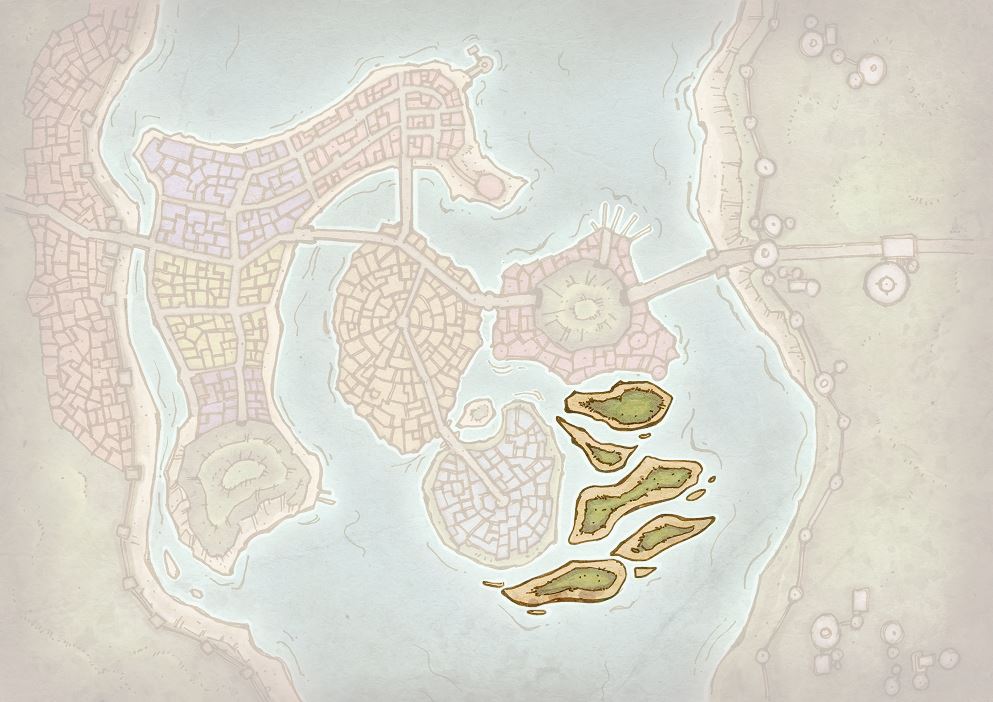 These are a series of islands to the east and south of the South Island. They are largely empty of structures, and each island contains its own unique vegetation, animals, and environment. Due to the clause in the Treaty on the Beach, building here is not allowed at all - not even a tent. Scientists study the islands during the day, but must return home or sleep on the island without protection from the elements.
Share
1