One of the biggest challenges in making a tabletop RPG is finding a dice system that works, is balanced, and more importantly is fun. While tabletop juggernaut Dungeons and Dragons uses a full family of dice (d4, d6, d8, d10, d12, d20, and occasionally d100), other systems like Monster of the Week only require a player to have two six-sided dice. While I genuinely love Monster of the Week, I did miss the feeling of more dice in my hand - there's just something visceral about picking up and rolling a handful of dice. 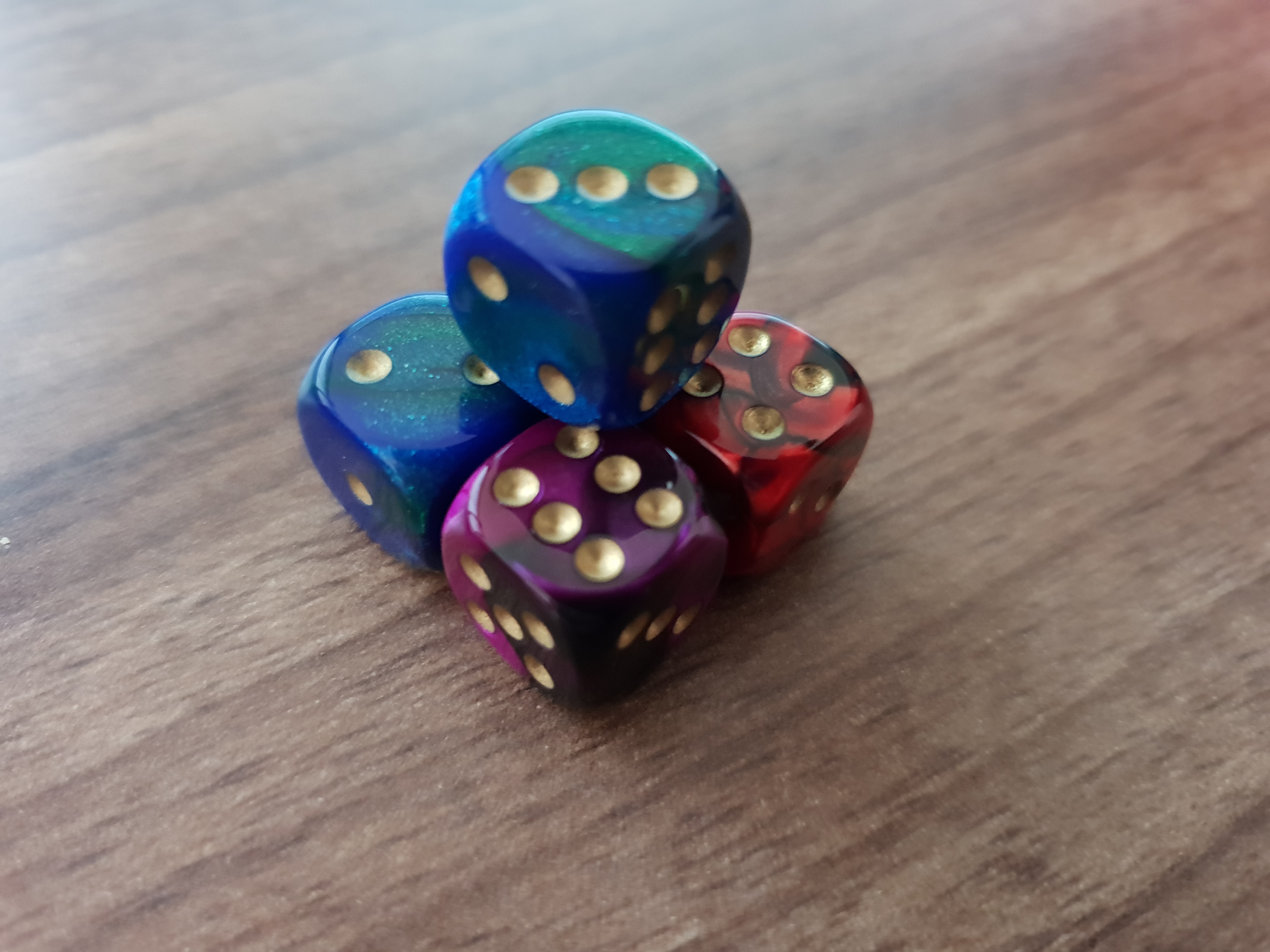 When deciding what dice system to use, the maximum amount of skill challenge had to be considered. On a scale of 1-5, with 1 being the lowest and 5 being mastery, it made sense to keep the dice and skill system interlinked. This allowed for the simplification of challenge levels and gave players the weight of each challenge in their own hand. A task of 3 feels daunting when you're holding a single paltry die - but because of how the dice system works, you could still potentially succeed. Also, 5d6 makes the perfect dice pyramid.
Skills, magic, and combat are a series of opposed rolls against the Charter Authority (Game Master). The Charter Authority controls the difficulty level of tasks, as well as non-player characters and beasts. The opposed rolls are compared die by die, instead of added together. The highest die goes against the highest, the next highest die is compared with the next highest, and so on until there are no dice to compare. Any dice left over that cannot be compared are discarded for that roll. There are times when a roll's lowest die may be doubled, effectively making it comparable against higher die.

This allows for successes and failures, but also mixed successes. One thing I wanted to add to Breakaway was the option to fail forward - players should have more than just a binary "success or failure" system, letting them play with the potential outcome a bit more. On a tie of successes and failures between players or between a player and the Charter Authority, a mixed success is achieved. From there, players can decide on how they wish their character to progress and fail in some way.
The dice system also allows for setbacks (a result of 1 on a die) and breakthroughs (a result of 6 on a die). Breakthroughs are used by players to give themselves narrative advantages, while Setbacks are used by the Charter Authority to give narrative disadvantages. I'm currently toying with the idea of swapping who gets to decide what - whether players should get to decide their own Setbacks instead of Breakthroughs. From extensive play over the past 18 years, I've found that I quite enjoy giving my characters a bad time! It will require further feedback, but that may be a small tweak to the dice system in the future. If your Statistic is higher than your Skill, you can roll the Statistic instead - but you will not receive Setbacks or Breakthroughs. 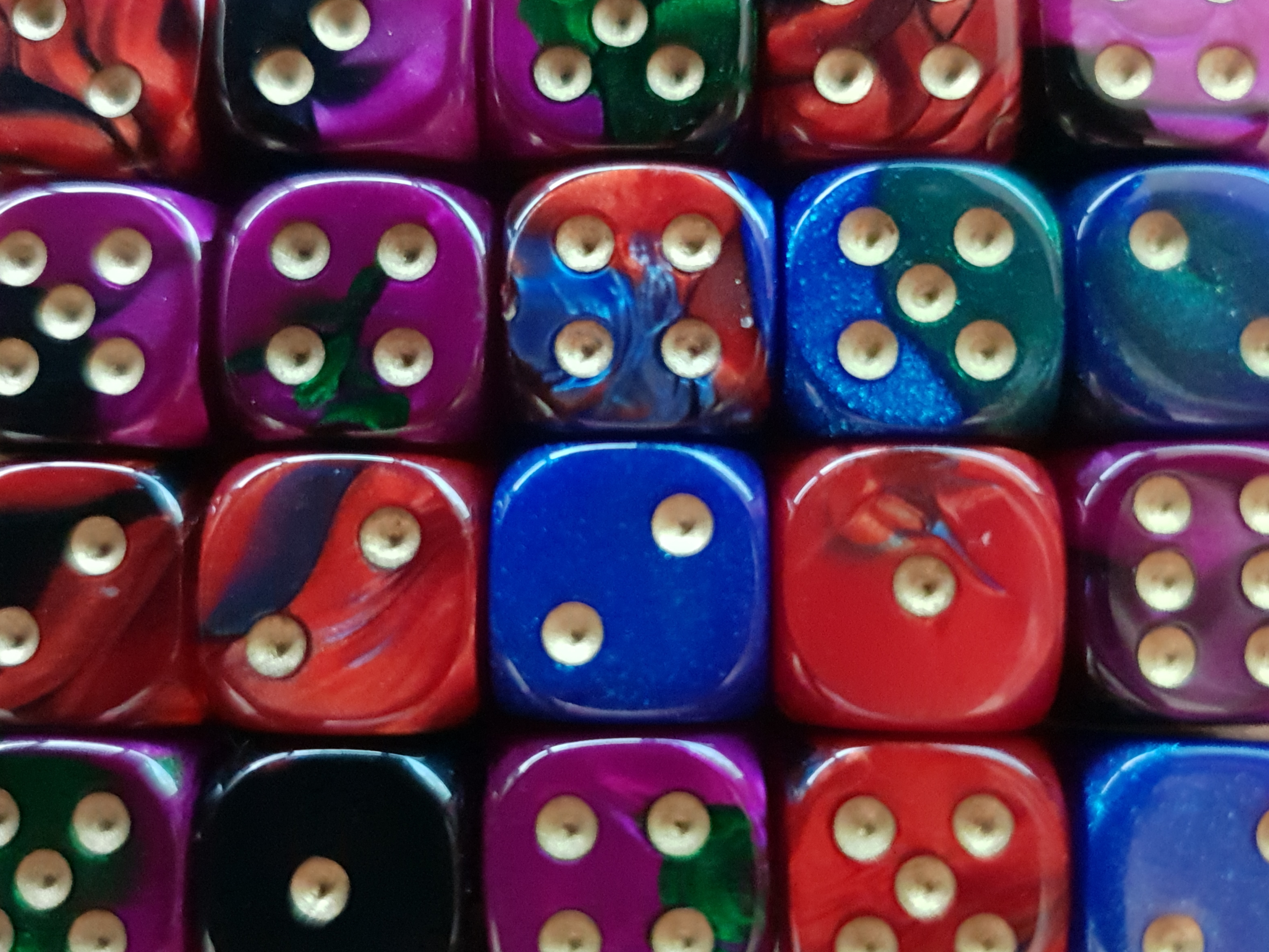 This is a whole lot of information at once, so I've written an example below to explain. If you have questions about the dice system, please email them here! Dice are a very important part of a tabletop gaming system, and it’s ideal that it gets plenty of testing before the rules head into the beta. I can talk more about skill levels and difficulty levels later, but for now I wanted to get this system out there and get feedback on how it feels during play.

Also, it should be noted that if dice tie when compared against each other, they are ignored. If the stars align and every single dice ties, the player can choose to take a mixed success or have a roll-off of 1d6 vs 1d6 with the CA.


* If the stars align and all dice tie, you may choose to take a mixed success or do a single-die roll-off against the CA.
** Successes and failures cancel each other out - unless you have one success and one failure. That is a mixed success.

Charter Authority (CA): You have received a gilded envelope with very flowery writing.
Beatrix: Does this look like the last envelope sent by the House of Celebration?
CA: It does, the handwriting is also recognizable to you.
Beatrix: I want to check if the envelope is rigged like the last one and, if so, open it safely. No mess this time!
CA: Roll your Insight skill against a difficulty of 3.
Beatrix: I have a 2 in Insight, so that's two dice. I rolled a 4 and a 2.
CA: I rolled a 6, a 3, and a 2. My 6 beats your 4, and my 3 beats your 2. My 2 is discarded, as there is nothing left to compare it to.
Beatrix: So that's a failed roll.
CA: You open the envelope, trying to take great care with it until, suddenly, you're covered in glitter. It's all up in your feathers.
Beatrix: Curses!
Kace: Can I try to get a sneaky picture of her covered in glitter?
CA: Roll your Guile against her Perception.
Beatrix: Aw, you can't just leave my poor character in peace?! I got a...5 and a 1.
Kace: Ooo a Setback! I got a 4 and a 3.
CA: That's a mixed success! You both have a success and a failure. I think I'll let you decide what Beatrix's setback should be, Kace.
Beatrix: Don't you dare, Kace!
Kace: I think...my character uploads the picture to my holoprofile and shows it to Beatrix.
Beatrix: My character runs at him!
Kace: He runs away! There's no way he's getting covered in glitter too!
Jackson: While this is going on, I get a picture of the chase and upload it with the tag #JustCharterThings.
CA: It gets 135 Hearts and you have 10 new followers.
Jackson: Indeed.
Share
1